NancyHB found a lump in the same location as a previous cancer that was now triple negative.
Advertisement 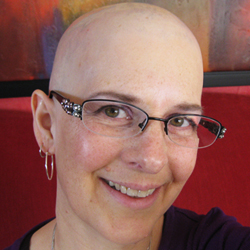 NancyHB is a member of the Breastcancer.org Community.

Hi, I'm Nancy. I've been a member of BCO since late 2011, when I was first diagnosed with Stage I Grade 2 IDC. I had four nodes with isolated tumor cells but no micromets so we felt really positive going forward. My oncologist called it 'garden variety' breast cancer and figured it would be easy to treat. The Oncotype test came back with a recurrence score of 42, which allowed me to participate in a chemotherapy clinical trial. I completed four rounds of AC and 6 rounds of dose-dense Taxol, and then 30 rounds of radiation. I remained cancer-free for four years, and my MO and I were on our way to calling it "cured." I struggled to get past this experience, but after four years I made peace with my cancer and was moving forward with joy and peace and love.

A few months ago I found a lump in the same location as my previous cancer; surprisingly, it was a local recurrence that was now TN. In the back of my mind I worried about local recurrence, but never knew things could change so dramatically — it wasn't one of those possible scenarios my MO ever explained. I sought a second opionion at the University of Michigan, and they explained that my previous cancer was 50% ER+, and only 10% PR+. Their thought is that some of the ER- and PR- cancer cells had survived chemo and radiation and waited around to start growing again as TNBC. Chemo was required; standard of care is AC but I'd already had the lifetime maximum so I'm completing Taxotere and Cytoxan (4 of 6 done!). Because I've already had radiation I will have to have a mastectomy later this summer.

It's hard enough to wrap my head around a recurrence; it's even harder to comprehend the change in hormone status. My MO has 'concerns' as he puts it, but still believes this is treatable and potentially curable. I avoid the internet and reading the "negative about the negative" because I believe that treating and healing my mind and spirit is as important as my body. I have faith in my team that they're doing everything they can for me, and I'm working to hold up my end of the bargain — diet, exercise, yoga, and lots of living.

A wise friend once told me, "Every day is a good day; some days are just better than others." That motto keeps me moving forward when days are tough. I'm still here, still moving forward, still determined to beat this.

The opinions expressed in this article are the author's own and do not necessarily represent those of Breastcancer.org nor are they intended as a substitute for the medical advice of physicians.