RebzAmy's Story: How I Let Go of My Fear of Recurrence
Personal Stories
/
Relationships

RebzAmy's Story: How I Let Go of My Fear of Recurrence

A new family of four — RebzAmy shares how life goes on after breast cancer.
Advertisement 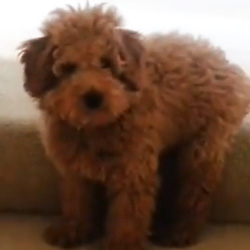 RebzAmy is a member of the Breastcancer.org Community.

This is a story about what helped me and picked me up from the almost obsessional behaviour I had/have of the fear of recurrence. Firstly in 2011, having been single for far too long, I met the man of my dreams and we got married within 9 months of meeting. At that point, I became a full time stepmom to my husband's child, as his mother (my husband's late wife) had passed away some years earlier. We were a very happy family of three.

I can't have kids, due to having had chemo. We talked about getting a puppy and finally took the plunge and became a family of four. Bugsy, a little Miniature Poodle puppy came into our lives in October 2014. He is the love of my life. I absolutely adore him and can't get enough of him. I'm not going to say it was easy because in the beginning it was absolutely so hard that sometimes I thought to myself, "OMG, what have I/we done!" Also because I work from home, the puppy was my responsibility during the day and in the early days that was so hard.

However, it was worth it 100 million percent. Bugsy doesn't allow me time to stop and think about what's happened to me. He's a bundle of joy and distraction from the moment I get up in the morning, until the moment I put him to bed at night. I feed him, toilet him and I wipe his bottom (yes, I really do!), bathe him, walk him and play with him. My husband and son do their bits when they are around, too. But I'm mummy to my little puppy and he cries for me if I go out of the room.

I adore our walking times together. I meet so many people when we're out and about and my pup gets so much attention as he looks so cute and has a cute, cute puppy cut rather than a Poodle cut. He's also so friendly in that he just loves attention from people and wants to be everybody's friend.

When Bugsy learned to come down the stairs, I videoed it and it turned out to be the cutest thing ever!

I just don't have time anymore to think about and dwell on what's happened. Even when I was sleep-deprived from the puppy crying at night and then having to get up early in the morning, even when I was cleaning up his accidents, but looking back, it was the best thing that happened to me. My puppy makes me laugh so much, my puppy makes me take him for a walk (which is so good for both of us), my puppy reminds me when it's feeding time or when he wants more water, he tells me when he wants to play, or go to the bathroom, he's so intuitive and I love this little bundle of joy.