sylviaexmouthuk's Story: I Found a Breast Lump But Delayed Seeing a Doctor 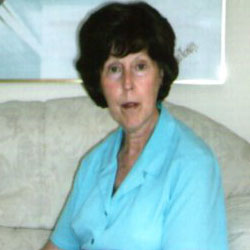 sylviaexmouthuk is a member of the Breastcancer.org Community.

I have a date that will be forever etched in my mind and that is June 20th, 2005. That is the date on which I was diagnosed with breast cancer. I did this after walking around with a lump in my right breast for a long time, that deep down I knew would bring bad news. On June 20th I saw my GP and after examining my breast and under my arm she told me that she thought I had breast cancer. I remember being very silent and I heard her say that under our NHS (National Health Service) system there would be a two week wait and then I would be called to the hospital. I walked out of her room to where my husband was waiting for me and I just told him the news and about the two week wait. I thought this was a long time and so my husband and I went back into the GP's consulting room and asked how I could get it confirmed sooner. She referred me straight away to a breast cancer consultant who worked in the NHS and privately and within two hours I was with that consultant.

I felt at ease with her from the very beginning and she would be my breast cancer consultant surgeon for the next eight years. Emotionally I was in turmoil but it manifested itself that day in quietness. The consultant examined me and did a fine needle aspiration as she told me she was certain I had breast cancer but she now had to prove it. She made an appointment for me to see her at her breast cancer clinic for the newly diagnosed the next morning, a Tuesday. That night I slept poorly and my mind kept saying I had cancer.

I was already finding this very difficult as I had never been ill in my life. That Tuesday was probably the worst day in all of my treatment. My emotions were out of control and I was teary, low in spirits and afraid. I remember sitting down at the consultant's clinic and just looking at everyone there. I was called in and was told to go upstairs for a mammogram and ultrasound. My consultant kindly had a young nurse tail me for the day. I tried to talk with her but I was overwhelmed with emotion that day as I had the mammogram, ultrasound and core biopsy. I kept weeping and developed a bad headache. After these procedures it was back to the consultant for a summing up. She told me I had breast cancer and that I would need surgery, chemotherapy and radiotherapy. She further told me to come back and see her the following week when I had had time to digest it all.

That evening I remember sitting in the bedroom and crying till I could cry no more. In fact I did not cry any more during my 18 months of treatment.

Looking back, I made some decisions that were wrong and I would say to anyone facing a diagnosis of breast cancer or discovering a lump not to delay but to get it sorted out straight away. I delayed seeing my GP and then I delayed having my treatment. This is not something that I would do again.

The next day I was more together and since I am studious and inquisitive, immediately started to read up about breast cancer. I read a book entitled The Cancer Directory by Dr Rosy Daniels and read it from cover to cover so that when I went back to the hospital I had already written to my consultant asking all sorts of questions about stage, grade, receptor status etc. When I saw the consultant she had the paper with her and went through answers with me. She told me that it was most unusual to be asked all these questions in such a scientific way and that patients usually just wanted to go through the treatment not knowing much. I would advise all newly diagnosed patients to get informed about what is happening to them and to be in control all the time. Back in 2005 I was not into computers and did not research the internet and in a way I am glad that I did not, but took my information from a reliable book. I think that at that time breast cancer was still very much in the dark ages in the UK, especially when compared to the US. Even now I find on the forum that American patients are probably told much more than they are in the UK, although I think UK patients now get more information from their medical team and in a way they have to be given this because the patients are much more informed.

At that time I remember my consultant telling me that the prognosis was not good because my breast cancer was not hormonal and she could not give me something like tamoxifen to help. She told me I was estrogen and progesterone negative. Nothing about triple negative as such was mentioned. I was told I had invasive ductal carcinoma. It was not until much later when I finally agreed to treatment that I was told that I was HER2 negative and that it was a good thing to be so. None of this meant much to me at the time but it certainly would later. I would tell all newly diagnosed patients to make sure they have this information.

In the UK we are told we can get second opinions, that we have the right to do it, but I am not sure whether doctors like it. I think the medical profession has had to open up more in the UK because of the internet and forums like this, where patients are getting lots of information and can speak up for themselves to doctors.

I finally started six months of chemotherapy in November 2005 after I had been through consultations with alternative doctors, a nutritionist and a homeopathic consultant to whom my breast cancer consultant referred me. Both told me I needed to have orthodox treatment and I now felt ready for it. The homeopathic consultant kept me as a patient throughout my orthodox treatment and prescribed things as adjuncts to my treatment.

Once I started the chemotherapy I was fine and was told that I had sailed through it. The worst part was losing my hair but I soon got used to wearing a lovely wig. I know that many women are really frightened of chemotherapy but there is no need to be. Find out what drugs you are going to be given and why, listen to your oncologist and get information and tips from those that have been through it. You can get through chemotherapy. There is life after it.

Three weeks after chemotherapy finished I was in hospital for five days for a mastectomy of the right breast. Again I would say to all newly diagnosed patients that you can do this and live without a breast.

I finished treatment with three weeks of radiotherapy with boosters and found time went very quickly with this. It is tiring going to the hospital five days a week for three weeks but once there the treatment is quickly over. Again, I would say listen to your oncologist and radiologist because they know what they are doing.

When all this treatment comes to an end you can feel cut off because you are no longer busy going to the hospital. You go into the next phase which is living as normally as possible and then going for your regular visits with the oncologist and the breast cancer surgeon. We all get anxious as the visits come due but most of the time we get good news and come out of the hospital feeling exalted.

Next June 20th it will be ten years since my diagnosis. Since then I have done everything to keep myself healthy and fit, I have lived life normally and I continue to do everything that I did before. I know I cannot take anything for granted but I just take one day at a time. I was given a poor prognosis but I think that was because, unlike the majority of women, I was not diagnosed with hormonal breast cancer. I am glad that I have not had to take any medication to keep the cancer at bay, so I can say that I am positive about having been diagnosed with what is now commonly called triple negative.

Looking back I can say that I had a dream team for my treatment. I think my breast cancer consultant and oncologist are dedicated women who go that extra mile. I was also glad that I was offered and accepted to have hospice care nurses come to visit me when I felt the need. They provided invaluable help with any problems I had, whether financial, emotional or medical.

As for food during chemotherapy I just kept to the plain foods that I had always liked. I think this is very personal and would say that you have to eat whatever will get you through your treatment. I know mashed potatoes with some poached fish helped me a lot, but mainly I kept to my normal diet, which is to avoid meat and dairy products.

Most of my treatment was during the winter months so the sun was not a problem, but in my everyday life now I am very vigilant about exposing myself to the sun. I have just what I need to keep up my vitamin D and take vitamin supplements.

I think the UK commitment to the environment could be improved but in my everyday life I try to avoid chemicals as much as I can.

I think that the breast cancer charities do a lot of good in this country but I think even more emphasis on cancer prevention is needed. I also think that women need to help themselves as well by following a healthy diet, not smoking, not drinking alcohol (or very little), exercising, keeping to a healthy weight and avoiding chemicals in their everyday life in the home. Very recently I read that reducing calorie intake to keep weight down has been found to help with reducing metastases especially in those with triple negative breast cancer. We have a serious problem with obesity in the UK.

Most hospitals here have charities offering all kinds of support to cancer patients.

I discovered Breastcancer.org in 2009 when I had finished treatment. I started reading the various threads and thought we were in the dark ages here in the UK with triple negative breast cancer in particular and decided to start the UK thread. I had no idea that it would still be going after nearly four years and I have felt so enriched by all the women from all over the world that have been on the thread at various times.

Breastcancer.org is a wonderful forum and providing a marvelous service.