Ricki's Story: On a Mission to Improve Breast Cancer Care for Black Women

Ricki founded her advocacy organization not only to support Black people with breast cancer, but also as a catalyst for changing the conversation around how the disease is treated in women of color.
Advertisement 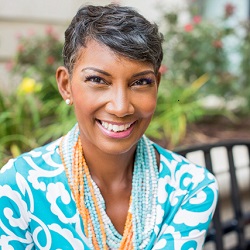 Ricki is the founder and CEO of Touch, the Black Breast Cancer Alliance in Annapolis, MD.

Ricki Fairley is not the kind of woman who takes no for an answer. So when the marketing executive and mother of two daughters learned that the triple-negative breast cancer she was diagnosed with had spread to her chest wall, she refused to accept the outcome she was told to expect.

“They said, ‘You’re now metastatic — you have 2 years to live and should start getting your affairs in order,’” she says. “And I told them we had to figure out another plan.”

Fairley reached out to the Triple Negative Breast Cancer Foundation, who helped her find another doctor for a second opinion. The second physician recommended a rigorous chemotherapy regimen. At the end of treatment, Fairley’s doctors told her she had no evidence of disease.

Feeling she’d been given a second chance at life, Fairley decided to quit her corporate job, downsize, and dedicate herself to advocating on behalf of other Black women facing breast cancer.

“I’m a miracle,” she says. “God had a plan for me and left me here to do this work, and I’ve been doing advocacy work ever since. I know that this is my purpose — that’s why I’m still here, because so many people have had triple-negative breast cancer and not survived.”

Fairley joined the board of the Triple Negative Breast Cancer Foundation, and through that and other advocacy work, she began to see a trend regarding Black women and often more aggressive and harder to treat triple-negative breast cancers.

So Fairley founded her advocacy organization, TOUCH, The Black Breast Cancer Alliance, not only to support Black people with breast cancer, but also as a catalyst for changing the conversation around how the disease is treated in women of color.

“We’re not messaging to Black women in the right way when you have 3% participation in clinical trials,” she says. “And because Black women aren’t participating in research, we don’t have drugs that work on our bodies.”

Fairley says the issue is two-pronged: despite spending a lot of money and having good intentions, pharmaceutical companies and researchers aren’t doing an adequate job of engaging Black women for clinical trials, and there’s hesitancy in the Black community to participate in such research due to cultural beliefs and distrust based on the history of Black Americans being subjected to dangerous and exploitive medical experimentation.

“Black women have this thing where they have to show their strength, and any kind of illness is a weakness — you have to be a superwoman and do it all,” she says. “Black people don’t talk about illness — it’s a weakness, and they’re so worried about being vulnerable. So when you take that power away from a Black woman, she’s totally vulnerable, and that’s what happens in the clinical trial situation.”

Fairley began reaching out to Black women to destigmatize the conversation around breast cancer. She launched a weekly web series, The Doctor Is In, with Dr. Monique Gary, a breast surgical oncologist, hosted on the BlackDoctor.org Facebook page. And she served on the Biden-Harris transition team, focusing on Black women’s health.

“A lot of the work I’m doing is trying to bring the conversation to the kitchen table and bring young women into the conversation,” she says. “What does the message need to be to get Black women to participate in research?”

The desire to answer that question and to uncover the link between triple-negative breast cancer and Black women led Fairley to launch #BlackDataMatters: Black Breast Cancer and Barriers to Clinical Trials, a comprehensive health equity research study that will investigate the deeply rooted barriers to clinical research participation. Fairley’s TOUCH, The Black Breast Cancer Alliance partnered with Breastcancer.org, the Center for Health Care Innovation, Ciitizen, the Morehouse School of Medicine, and the Susan G. Komen Foundation to conduct the study. In February, the group was awarded a Genentech Health Equity Innovation Grant to fund the research.

Fairley says this investment and the partnership with such a respected group of organizations gives her faith that this study can produce potentially life-changing data for Black women.

“I’m hoping that we’re going to uncover this secret thing we don’t know and change the paradigm on how we talk to Black women,” Fairley says.

And Fairley says she hopes this work will not only benefit current patients and survivors — including her network of friends affectionately known as “breasties” — but also save young women and girls from having to endure what she has experienced with breast cancer.

“I want to change things, and we need the science to do that. And I want to teach the companies how to talk to Black women. Even with the best intentions, it’s not happening now, so what do we do to change that?”