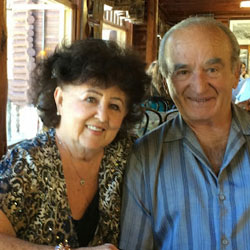 Chevyboy is a member of the Breastcancer.org Community.

I've been around here for almost 5 years now.... Started out just like you gals, scared to death on hearing those words: "Well, it looks like breast cancer, but whatwewilldoisjusttakeitoutprobablyradiationanditwillbeoverwith."

It was all a blur, when the doc was doing that test...

I finally went back to the "closet" to put my clothes on, and just hit my head on the wall. "It COULDN'T be me!" I was supposed to go talk to a scheduler, but I said, "Wait...I gotta get my husband in here..." I ran outdoors to get him, and set him down with us. She started talking and I said, "Okay, honey, they said I have breast cancer, but will know more after the biopsy, but they will just remove the little tumor, probably I'll get radiation, and then I will be done."

I was doing this not only for me, but for HIM! I couldn't let him see how afraid I was. We had been together for 53 years! WHAT would we do without each other? So he had to think that I would be fine!

The doctor called...it was breast cancer, she said. I just went outdoors and went to my husband's arms. DAMN! Had the lumpectomy surgery, removed a tumor about the size of my small fingernail, had the MammoSite device implanted for the radiation, and then had that removed after about a week!

That treatment was twice a day, for about 7 days and it saved a lot of time from having to do the normal 6 week time for the radiation treatments.

I didn't do chemo. My score — and you should have the OncotypeDX test to determine if you need the treatments — was 19, a low intermediate....

I was advised by one oncologist [to do chemo], who I quit going to because he said I should do chemo. My surgeon and my radiologist both said I really didn't need chemo...unless I wanted it.

You know, my biggest fear was for my daughters! They are both in their 50's! I just didn't want them to have the inherited gene that I had heard about. I was tested, and I was okay...even though my mother had breast cancer also. She lived a long life after, just like I am!

My oldest daughter said, "Have them both off!" Well THAT made me feel just awful! I was scared enough, and didn't even THINK about taking the "girls" off!

Her thought was, "I just want my mom, it doesn't matter if you have breasts or not..."

She, like me, has heard a lot of stories that don't have happy endings. But she flew in from out of town, and together we all went in for this surgery! It was like a party...and I was the main attraction! Both daughters, my husband, and our "other daughter from another mother!"

Just WAITING for the surgery will drive you nuts. I made sure they all knew about how sick I get from the anesthetic....

So then that's all I remember! I was DONE! I was ready to go home, except I was rather...um...tired!

The thing that scared me was once when I had to go to the bathroom, it was BLUE! I asked, "Is THIS normal? I mean I wasn't peeing blue before, but now I AM?"

They just laughed, and said, "Yes, that is the nuclear dye they injected to find the lymph nodes," or something that I wasn't even paying attention to — AND my family was not even around! The girls took their dad out to lunch, went shopping, while I was in the throes of danger! My surgeon had to call dear daughter, to tell her we were all done, and they might want to come GET me! That was sooooooo funny! But they all made that next week a fun time. We went shopping — and OH! I set off the alarms going through the store doors, because the nuclear dye was still in there! Haha! I just laughed!

I found BC.ORG when I was looking for help, trying to find out what was going on, and what would happen! I even started my own thread (because I didn't know what I was doing) and it was called "Am I the oldest one here?"

And I'll always remember Jo5 answered that call for help. She and many others! I asked them all my questions and since they had BEEN there and DONE that, they really made me feel re-assured that it would all be okay.

Almost 5 years now, and I have "talked" to and made so many friends here that I consider them almost like family. We STAY friends...talking about everything from soup to nuts. Well, like family problems, our latest worries, and like me breaking my hip. (I actually found this harder to get over than my BC! Stories started that I broke it falling off that dancing pole, but oh well, sounds better that way!)

We all go through a lot together.... Some are still going through treatment, but we try to make them feel welcome, and that we can help them through it.

My youngest daughter gave me a CD when she was worried about me: Martina McBride's
"I'm Gonna Love You Through It."

We are always here at BC.ORG. Hope you stick around awhile, you will make lots of friends!