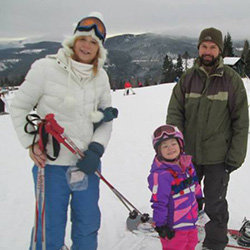 mirryp is a member of the Breastcancer.org Community.

In the spring of 2011, at age 49, I was training for my second running of the Boston Marathon and was really struggling. Constantly tired, a backache, getting slower instead of faster on runs, occasional nausea and having a lot of night sweats. I attributed it to a combo of approaching menopause and extreme training. "Nice timing menopause," is what a thought. For marathoners, qualifying for and running Boston is like a personal Olympic moment. During what is called "taper" for the marathon (the three weeks before the race where training is scaled back), I did not experience the return of energy as I had during previous race training cycles. I ran the race but vomited several times, had terrible chafing of my left nipple, and was an hour slower than the previous year. I decided in consultation with members of my running club (who needs a doctor?!) that I had overtrained. I quit running my daily workouts for a couple of weeks. I still was tired and the cracked nipple had never healed so I decided it was time for a physical, 7 months since my last exam and mammogram.

When I saw the doctor and he asked about the earlier appointment, I explained the tiredness and then showed him the scabbing on my left breast. I could tell from his face that it wasn't good. He asked permission for a picture so that he could email it to a colleague, he would not include my face. He told me he'd be right back, I took deep breaths and counted ceiling tiles in his absence. When he returned, he said that he wanted me to see the surgeon down the hall right away, as in that hour. An immediate biopsy of the skin surrounding my breast and 2 days later the surgeon, whom we've nicknamed Dr. Doom, called us in for the results, stage IV metastatic breast cancer. Then he said, "two years." No love for Dr. Doom and his bedside manner, but he did get us an appointment for an oncologist right away, as in that hour. On the drive to the oncologist office, I was still in shock, knew nothing about stages and that IV was bad and didn't know what metastatic meant. I said to my husband, "Two years of treatment is going to be tough." He replied, "I think he meant two years to live, I think an oncologist giving up his lunch hour to see you immediately is probably not a good sign."

The wonderful Dr. K. "tsk-tsked" about the two years when we explained what was going on. He used hopeful terms such as incurable but treatable. A good quality of life possible. He left the room for a bit and I counted ceiling tile while my husband quietly cried. He returned with printed out papers and was excited to explain he thought I was eligible for a clinical trial. Still in shock, knowing nothing about clinical trials, I relied on the standard, "If I was your wife, what would you recommend?"

So I begin testing to confirm eligibility. A stage 3 clinical trial, comparing Ixempra and Avastin, against another chemo and Avastin. Randomized to which drug I would get, but he assured they were both good treatments; the Ixempra, an older and a little harsher, but an effective drug. I had a bone scan, PET scan, EKG, chest x-ray, and an MRI. Insurance approved the enrollment and coverage and the test results were that I was eligible, but confirmed cancer in my spine, pelvis, sternum, micro spots in my lungs and a 5 cm tumor in my left breast. I was selected to receive Ixempra weekly; 3 weeks on, 1 week off. Avastin every other week, and monthly infusion of Zometa. I was told to take vitamin D, magnesium, a daily aspirin, and to avoid citrus. CT scan every 2 months to check for success. For the first 10 months, the breast tumor and lung spots regressed and the bones were stable. For the next 5 months, everything remained stable. Although Ixempra was considered a harsh drug, I found it manageable, I continued to work full time, ran a mile or two a couple times a week, and helped my daughter plan her wedding. I never lost the hair on my head although it thinned a little, and I did lose my eyebrows and eyelashes. Just slight nausea and lots of bone aches and fatigue. About 4 months in, the FDA took away approval for Avastin for breast cancer. We discussed whether to continue and because I was still regressing and my blood pressure was okay, we continued with it.

After 15 months, there was a slight progression of the breast tumor, although Dr. K. said it might be in the reading radiologist because it was so slight. It did disqualify me from the clinical trial. The good news was that my cancer was hormone positive and I could expect success with anti-hormonals. Dr. K. said Femara is a mighty pill. So far he has been correct. I have been on Femara, monthly Zometa infusions, and the over-the-counter vitamins for 34 months with continued stability and normal tumor markers. 49 months and counting!

Last fall I ran a half marathon and am training for my second since diagnosis this fall. I will run up a mountain in ID next week in a trail race accompanied by both my adult children and my granddaughter. Last New Years I skied with my husband, children, and grandchildren. I still work full time. I have some neuropathy and fatigue, chemo was hard on my teeth and gums, and I miss my eyebrows and eyelashes, but I live a pretty normal life. Monthly infusions of Zometa, doctor appointments every 3 months with a tumor marker test, and CT scans every 6 months. I'm not sure why I have been so lucky, I have a stubborn personality, a good hopeful doctor, and I stay active and busy. I feel about 95 when I wake each morning, and feel like the Oz Tin Man needing oil, but once I'm up and moving, I have hours and hours where I feel okay, some moments where I feel terrific.

I try to live in the moment enjoy each day. We travel a lot. I spend as much time as possible with loved ones, I seek out new experiences and try to continue learning new things. The hardest part is not knowing, the "I might not be here then" thoughts looming. Financially, it's hard to plan — should I retire and spend the money we've saved for old age, or should I keep plugging along at a job with the hope that I'll still be here in 10 years to retire when I originally planned financially.

What helps most is to just keep moving. To keep planning, to have something to look forward to in the future. Something special every day, week, and month.

People were most helpful during chemo in doing the little things; calling if they were headed to the store to see if I needed anything, calling to see if our dog would like to go the dog park with theirs, watering my garden on my chemo day. Cards to let me know they were thinking of us. Now what helps me most is people who treat me "normal." I still love to laugh. I look at before pics and miss that healthy person, so honestly my favorite thing is a comment on how happy, pretty, nice I look today.