Throughout treatment, marianelizabeth benefited from services and activities focused on mental health.
Advertisement 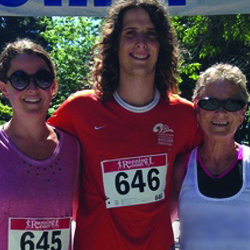 marianelizabeth is a member of the Breastcancer.org Community.

Just two years ago this past Sunday I was recovering from a lumpectomy. But better to start at the beginning.

In late July I found a lump as I woke up — my hands were cold and I put them in my armpits. Found a lump in right breast and half hour later was at a drop-in clinic as my GP was away all summer. She had done a Pap smear in early June but disappeared right after and I just thought she was too busy to do the usual breast exam. Had had a regular mammogram 7 months before and was told all good, come back in 2 years.

Drop in GP faxed an urgent referral to Mt. St. Joseph Hospital where there is a Rapid Access Breast Clinic. I had worked there as a nurse long ago but the clinic is only a few years old. Ancient hospital and tiny clinic but wow, on the ball. Within 5 days of the referral I had a digital mammogram and ultrasound and if I had known much about breast cancer then I would have know right away I had breast cancer. I was pretty sure anyway. That was a Monday and I was scheduled to see a clinic doctor for Wednesday but Tuesday got a call saying cancel that and come for a core biopsy. Head of radiology did that and because I was supposed to leave for Turkey a week from then, he said he would try for pathology by the next Monday. Instead the results were back in 2 days! Initial core biopsy path was not so bad and when I saw the breast surgeon the next Monday and she said due to summer holidays she and her colleagues and I think operating rooms were all booked up so had to wait until September 7. But up to this point I have to say everything was done very quickly and competently.

There seemed to be no nodal activity and results did not show any lymphovascular activity. Fast forward to September, lumpectomy done and an almost 3 week wait for pathology. Perhaps one of downfalls in British Columbia as each patient is assigned a pathologist and we have to wait. Results were surprising even to breast surgeon and size of tumour was much bigger than 7 weeks before >3cm instead of >2 cm, sentinel node biopsy but breast surgeon saw more so they took 8 nodes, 6 of them positive, margins not great, extensive lymphovascular invasion.... But I was quickly referred to British Columbia Cancer Agency and saw a medical oncologist (MO) within 10 days and prior to that had a bone scan and abdominal ultrasound. MO ordered a PET scan as a lung nodule showed on ultrasound. Port put in a few days after I saw the MO as my veins were terrible; again on a wait list but got in soon.

So far totally impressed with system. No cost to me at all as our provincial health system pays all to this point. The only discussion about our paying money was for Neupogen if I did dose-dense [chemotherapy]. MO preferred dose-dense for me as it had been decided this was aggressive especially with my age (63 then) and the fact that I was estrogen- and progesterone-positive and HER2/neu negative, usually not so aggressive for the likes of me. In British Columbia, we have what is called Fair Pharmacare and a referral was sent in immediately and within 24 hours I was having a conversation with them. Based on family income, we had to reach a deductible which was not horrendous for us — I think about $3000. But also in Canada, Amgen created the Victory Program and they kicked in part of the cost. I did have to pay for any oral meds too that were used with chemo but not meds that were given intravenously or right at time of chemo. We did not have extended coverage but I know women who did and some of them were able to access Neulasta. Fair Pharmacare only paid for Neupogen. I was hospitalized at the end of the first 4 chemo sessions (A/C) with zero white blood count and tanking hemoglobin (65). Two units of blood later all was OK and [I took] a week off, then Taxol for 4 sessions. Then a lot of discussion about mastectomy or radiation first. Due to the aggressiveness, there was some consideration about radiation first but I wanted my mastectomy with immediate reconstruction with tissue expander. So many appointments later, I got the plastic surgeon I wanted and only waited 5 weeks from end of chemo to mastectomy with tissue expander. All paid for by our provincial health system. I have to say though that each province is different.

I had a few weeks of recovery then on to radiation, full on 4 areas due to concern about nodes. I did have another positive node during mastectomy and full axillary dissection even after chemo so they were still concerned. Radiation did a number on my skin but plastic surgeon was able to fill my tissue expander though at one point he had to do a revision as the scar opened up. I waited almost 6 months after radiation for tissue expander exchange and my plastic surgeon did have to send in requests for an augment and lift on the good side. First go they did not accept it, but second time they did, so again no cost to me. I had that surgery last December and it went well. I don't love my implants but I know I am fortunate that all this has been covered by our healthcare system and I am here to tell the tale! By the way, when I first found the lump I Googled, "found a lump" and first thing that came up was Breastcancer.org.

BCCA (British Columbia Cancer Agency) provided many services. I went to a 2 hour nutrition class just for breast cancer women and it was excellent. Later on I was accepted to an MBSR (Mindfulness Based Stress Reduction) 8 week course which was the best course I have ever taken and still use things learned from it. I have been able to go back for one day retreats with the facilitators and others — this course was for all sorts of cancer patients. I also asked and was given a counselor at BCCA but that was not great and my MO referred me to a psychiatrist at the agency as I found myself quite depressed post mastectomy. She was wonderful and we met several times over the next year. Mediation and yoga have been my go-tos when things have been rough.

I am on anastrozole for 5 years — bone density test before I started the radiation showed spine OK but right femoral neck osteopenic. I am very active and my MO thinks this will help against osteoporosis. I trekked high altitude in Nepal two months before diagnosis and my MO said the more active you are through chemo the better it will be. I agree even when I could hardly drag myself out of bed.

I did a short course triathlon one year after diagnosis and though I fell off my bike on that part and seriously injured my shoulder and arm (luckily good side!), I did finish. This year, exactly two years to the diagnose date, I did it again and faster and no fall — 2 of my 3 kids did it with me. In March, I went back to Nepal and trekked 5 days on my own with a guide/porter then led a 10 day trek to Annapurna Base Camp. I was a bit slower and do get tired more easily but I am going back in two weeks to lead another trek, now at age 65, officially a senior.

Breastcancer.org has been a lifeline and I am part of a private Facebook group who met on the September 2012 chemo thread. 15 of us met a year ago in Vegas at a VRBO (Vacation Rental By Owner) and a larger group continues to support each other online. One of our members is now in palliative care but she is still with us in so many ways. We all thank Breastcancer.org.