Gardengirl66 delayed follow-up testing because she knew the results would change life for her family.
Advertisement 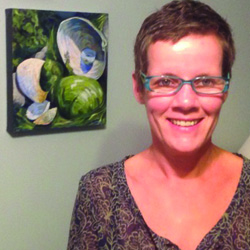 Gardengirl66 is a member of the Breastcancer.org Community.

I was a 47-year-old female at the time of diagnosis. I am married, with two children, at the time their ages were 14 (daughter ) and 10 (son). I had a pain in my right armpit that extended down into my ribs. I had this area of pain for almost two months before going to my doctor. My family doctor asked if I wanted to have a mammogram, just to rule anything out, and we laughed as I had never had one before and to cross it off the bucket list. My mammogram was in June 2013; when I heard back [it was suggested] I should go have a second one and an ultrasound as the results showed up possible abnormal.

I did not respond. [I] waited til September 2013 to deal with it and go for the second mammogram. It was the end of school, summer holidays beginning, kids both had friends coming to stay and I did not want them to connect my health and tests to ruining [summer]/or just when mum was diagnosed, etc. Everyone had a wonderful summer, I went in for the next tests, which the medical profession questioned why I was so slow at coming back.

The second mammogram, the X-ray tech could not find anything. (Happy feeling!) Then the ultrasound tech showing and telling me a little black looking irregular mark, 3mm by 9mm, taller than wider, which was the same size of what they thought they saw in June. (Sad feeling.) The lump was in my left breast at 1 o'clock. My biopsy was October 28, my husband came with me and it was in my local hospital, four core biopsies taken. They had to freeze the breast tissue. At least four times I was in tears, and was told they think I am positive and that a nerve was probably attached to it from my reaction. They apologized for telling me, but I said I knew in my gut that it would be positive for cancer. They were great and very caring towards me. The results were back quickly, within two weeks seeing my doctor and getting set up to see a surgeon. The funny part: the pain I had in my right armpit disappeared after the biopsy and it was found in the left.

My surgery was scheduled for December 20. We, with my surgeon, agreed on a partial mastectomy. My surgeon, Dr. Creedon, was fabulous; loved his bedside manner, all the information he shared, and always talking to me with caring and respect. I had never had surgery before, the only time I spent in a hospital as a patient was when I was giving birth to my children. I had day surgery, everything explained to me, great staff. I was home for dinner and felt good. I was given morphine to take home if I needed it for pain management. The next day, I was able to take my daughter to Cavallia, and felt good. Saw the surgeon a week later, everything healing great and did exercises for \[my\] arm. The surgeon told me to do whatever I wanted for the next six weeks, relax, travel, just to do whatever I wanted to do, before chemo would start. I had three lymph nodes also removed, one positive, 1mm dot was found.

My armpit was swollen, but healed well. Never had any infections. With exercise (which hurt at the time), have full movement back, but still have an armpit that feels frozen/numb.

I chose and agreed to have chemotherapy and then radiation. With one positive node and the final cancer lump size being about 1cm, invasive ductal carcinoma, high hormone-positive: 8/8 — straight A's as my teacher friend said. I just viewed it as jumping into the deep end, not to over think or research each treatment, one step at a time.

My oncologist recommended docetaxel and cyclophosphamide, every three weeks, for a total of four times. All this was at my local hospital, again with a great team of nurses and support numbers to help as well. This was supported with Neulasta shots, which I received at a local clinic, where I bumped other patients to get me in and out to help protect me from infections. I have a healthcare plan and extended healthcare through where I work. I did not have to pay a penny for the shot — 80% covered by Blue Cross, the remaining from the Victory program.

My support medication for chemo: Kytril, Maxeran, Decadron, Emend, ranitidine, and Claritin 24-Hour to help with the bone pain from the Neulasta shot. The first week was the most painful, felt like I had been beaten up and tossed from a car...what I imagine that to feel like. On day 14 of the first chemo, shaved my head. Did not like it, but felt good at the same time. I did start wearing a wig, which my extended healthcare covered as well. Wearing a wig took a while to get used to, then I wore it all the time outside of home. This was a request from my children...to make it seem more normal for them. And I did get lots of compliments.

I found chemo very doable, was thankful I had only 4 treatments, as the side effects stayed around a little longer each time. My oncologist told me that 5 years ago I would have had 8 treatments. I never did throw up, but felt nauseous at times; the change in the taste buds was awful. Last chemo was April 11, started radiation treatment May 3.

My hair started to regrow about 4/5 weeks after chemo ended. My radiation treatment was 16 [sessions] all over the entire left breast and regional nodes with boost to incision area. I used Glaxal cream and marigold cream to moisturize the entire area. My skin managed to stay intact, it scabbed and peeled three times before healing over. Stopped wearing a bra during that time, and wore tank tops...and very little exercise during that time as well.

I returned to work during my radiation treatment, about halfway through it and have been working ever since. I have sick days through my work, and was fortunate not to worry about my job, finances and healthcare. I work for a municipality with pretty good benefits and part of a union.

I have chemo-induced menopause, with hot flashes throughout the day and night sweats and dehydration...but does not cause pain! About three months after chemo, arthritis set in. Explained by my oncologist, another side effect of chemo-induced menopause, my body reacting harshly to it. Since I started tamoxifen, my arthritis has actually improved...it must be giving me just enough estrogen to take the edge off. I am now 48, but at times felt geriatric...hated it.

Throughout all of the treatment the hardest part was telling my children and parents. It is getting better, but trying to find a new normal and carry on is hard. It is all very surreal. There is no family history of it, fairly healthy, drank alcohol moderately, low meat intake, breast fed...just one of those things. I never would have found it if was not for the strange pain on the other side, which has disappeared. I would not have had a mammogram till I was 50, three years later and who knows what stage I would be at.

One other part of my story I would like to mention: it was a way to lighten the mood for my two children when I first shaved my head — we turned it into a celebration and got an ice cream cake. And after every chemo session, we went out to a different restaurant which one of us got to choose...trying to make it a little less scary for the kids and to show them dealing with cancer is doable.

I am thankful every day and I do enjoy more everyday little things. This website has been a big help throughout the treatment, especially the shopping list for getting through chemo.

Note: The painting behind me in the picture is from an artist friend of mine, Cheryl Painter, who has inspired me throughout all of this.