Tanya's Story: Family, Faith, and Community Got Me Through
Personal Stories
/
Relationships

Tanya's Story: Family, Faith, and Community Got Me Through 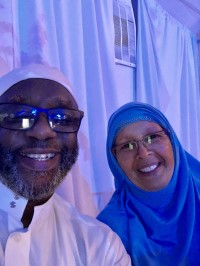 Family, faith, and community are what help Tanya thrive.

Having worked as a mail handler, teacher, and social worker, while raising five children with her husband Inshirah Abdel-Jaleel, Tanya, now 62, has always been in the thick of things. She also pursued her own hobbies, such as gardening, taking Spin and Zumba classes, and swimming.

“I was skipping along life’s path and found stage III lobular breast cancer at the age of 46,” in 2003, she wrote in her Breastcancer.org Community member profile. That year, Tanya had a partial mastectomy, a port, chemotherapy and radiation in New York, near where she lived at the time. She then took Arimidex and Fosomax for the next five years.

Thirteen years later, in January 2017, Tanya developed a cough. “I told my husband I thought I had a cold, or the flu, or bronchitis, because my back was hurting from all the coughing,” she said. “I had never felt this sick in my life.”

An X-ray revealed a fractured disc in her back, and an MRI (magnetic resonance image) diagnosed it as stage IV breast cancer, with metastases through the bone, uterus, ovaries, rib, and hip. She had a hysterectomy, as well as two back surgeries to treat the disc issue. She also began an ongoing regimen of medicine that she says keeps her stable, including 13 cycles a year of Ibrance, Faslodex, and Zometa.

“Everybody thinks of cancer as a death sentence, and so did I,” said Tanya, who at the time of her first diagnosis worked as a social worker for Child Protective Services in Suffolk County, New York. Several coworkers there had also experienced breast cancer diagnoses and helped Tanya understand what to expect regarding biopsies. They also recommended which oncology surgeon to see and supported her through treatment-related side effects.

“I was weak, bald, and throwing up,” she said. “I was living in side effect world.”

She found additional help from other areas of her life, including her job and religious organizations, said Tanya, who is Muslim. “People were praying for me; and at my employment, they paid my salary for a whole year with … employees donating their sick leave,” she said. “My job was there when I came back to work, and we never had any financial difficulties. There were a lot of blessings in the horrible diagnosis.”

Other friends from her teaching job paid for her to have acupuncture treatment, donated fresh wheatgrass and carrot juice, and arranged for a housekeeper while she recovered.

The experience also made her husband more aware of her work in the household. “As soon as he had to do stuff like taking the garbage out, he started crying and said, ‘I never realized how much you did.’”

During her first diagnosis, Tanya and her husband were home with their youngest child, Fatimah, then 15. Her older children, Abdul, Faruq, Baiyina, and Zakiyyah, then all in their 20s, lived elsewhere. “It was really excruciating and difficult,” Tanya recalled. “I had an allergic reaction to Taxol, and anaphylactic shock. I was really ill for a whole year.”

But her faith helped her get through.

“I remember praying, saying, ‘If you’re done with me, with my service on the Earth, I’m sad, but if this is happening because of something I did, please show me.’ And then, I lived.”

Tanya recovered and moved to Tampa, Florida in 2007 to be closer to her father. She experienced a recurrence in 2013 with extreme fatigue and back pain. After her surgeries and treatment, she retired as a social worker, but today still volunteers her services for a few clients including a local women’s homeless shelter.

As a retiree, Tanya spends her time visiting with her 17 grandchildren and has traveled with Inshirah to the Grand Canyon, Las Vegas, Hawaii, and the holy cities of Mecca and Medina in Saudi Arabia.

She also appeared on Good Morning America in New York in October 2019 as part of a Breastcancer.org awareness program featuring 16 women touched by the disease. “It was exciting,” she said, appreciating the opportunity to discuss her experiences with GMA anchors Robin Roberts and Amy Robach, who have also been diagnosed with breast cancer. “They talked to us and were a nice group of women,” she said.

Tanya finds similar camaraderie with the people she interacts with online in the Breastcancer.org Community. When she met one woman from the Community for the first time for lunch in Tampa recently, “we talked for two hours and we had a fabulous time. The people around us told us we looked like we were old friends,” she said.

Tanya also appreciates the ability to support other Community members by sharing “information about side effects or treatments or supplements that might work,” just as her former coworkers once shared similar details with her when she was first diagnosed.

Tanya also treasured a trip to Orlando during the summer of 2019, where she and her husband took ten of their grandchildren — aged 4 through 25 — to a resort for a week. “Someone said to me, ‘your grandkids are coming; you must be so tired,’ but for me, I love the noise and the busyness. I was exhausted out of my mind, but we all socialized and everybody spending all that time together, it was really nice for me.”

Making time for her loved ones and for the things she deems important is something Tanya cherishes. She urges others to do the same.

“As humans, we all know we are going to die, but we don’t think it will be anytime soon. With metastatic breast cancer, you feel your days are numbered more than someone else,” she said. As a result, “anything you want to do, you want to do. I would say to live like that regardless of your diagnosis. Be careful of how you expend your energy; you don’t want to waste it on something meaningless.”

Knowing what is meaningful is key.

“I really like to be in service to humanity,” she said, explaining how she trained to be a social worker after teaching, then used her expertise to be a school counselor. She then worked at a nonprofit and counseled refugee children from Syria, and later worked with children in foster care. Finding that path took some time.

“As a young kid, I had a lot of difficulties in finding my way and being outspoken as a teenager and getting in trouble,” she said. “Working with kids now, when you are in a classroom, you see that the teacher is trying to make hamburgers, all the same size. But if there is something about you that is different, that is powerful, know that you’re not just a robot.”

That goes for living life with metastatic breast cancer, too.

“My recommendation is, don’t dwell on the idea that ‘this could be it,’” she said. “When I’m busy with a lot of things in my life, I’ve always been happier. Our lives become very different with this diagnosis, but we still have the same unique qualities about ourselves. Try not to lose that in the midst of treatment.”