IntoLight's Story: Hopeful for the Future After a Prognosis Extension

A slight shadow under the arm on the mammogram (plus fatigue and a little back pain) led to IntoLight’s surprising MBC diagnosis.
Advertisement 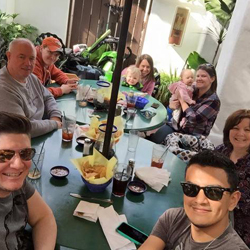 IntoLight is a member of the Breastcancer.org Community.

I was diagnosed with stage IV breast cancer in May [2016] that had metastasized to my core bones and liver. Prior to this, I was very diligent with my mammograms, and had no pain or additional symptoms other than fatigue and a little back pain after I had been sitting at my desk for a long period of time. What 63-year-old does not have fatigue? But I also wondered why I was so out of shape all of a sudden. I struggled to walk up the hill to my office. Last May my mammogram was clear but there was a slight shadow under my arm. I went in the next day for an ultrasound and the tech saw an enlarged lymph node. She did an immediate biopsy and I drove myself home on the busy San Diego freeway with an ice pack under my arm. Three days later I received a phone call at work from a surgeon who told me my test was positive for cancer. My husband and I both work at the same university, so I shakily walked down the hall and informed my husband I had cancer and we had to go home. That was all of the warning he had, but it was all I could do. He has been my rock ever since.

A PET scan and MRI the following week revealed the extent of my many tumors that had metastasized to all of my core bones, spine, clavicle, ribs, right arm, hips, etc.; thyroid; and enlarged lymph nodes, but thankfully nothing in the neck or head. There was no lump in either breast, but since my results of ER+/PR+ HER2- were consistent with breast cancer, that was my diagnosis. My surgeon referred me to an oncologist/hematologist since he could not help me. My oncologist, who is the same age as my daughter, immediately placed me on targeted therapy of Ibrance and Femara, and I receive Zometa every 3 months. I tolerate the combination well with mainly increased fatigue, occasional nausea, and thinning hair. Following my PET scan in January, my oncologist informed me ALL of my mets were resolved, including my liver. This is amazing and I credit it to my amazing support system, and prayer. My doctor was surprised the liver is also clear. I still have activity in my lymph so I remain on the Ibrance and Femara since it is working. After 11 cycles, I am doing fairly well. My immunity numbers are low but not too scary. My daughter and 2-year-old granddaughter live with me and [she] brings home multiple viruses from daycare, but I am able to fend off most of them with care wearing a mask around her when she is sick, and sanitizing everything before I touch it. I was even able to fly by myself to MO and meet my new grandson!

My only current complaint is increasing fatigue due to the meds, but I am thankful for the extension of my prognosis. I plan on watching my three (so far) grandchildren grow up and celebrating my 50th anniversary in 6 years.