In this Breastcancer.org podcast, Dr. Marisa Weiss discusses a study examining survival rates after lumpectomy plus radiation or mastectomy for early-stage breast cancer. The study was presented at the 2015 San Antonio Breast Cancer Symposium Dec. 8-12.

Listen to the podcast to hear Dr. Weiss explain: 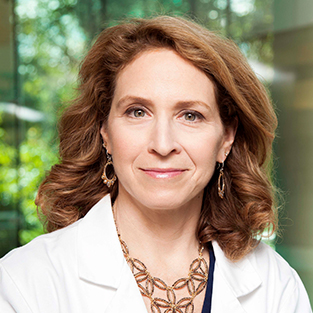 This podcast was made possible by the generous support of Lilly Oncology.

Jamie DePolo: Hello. Welcome to this edition of the Breastcancer.org podcast. I’m Jamie DePolo, the senior editor at Breastcancer.org, and the guest on this podcast is our Chief Medical Officer, Dr. Marisa Weiss. She’s going to talk about a very interesting study that was presented at San Antonio looking at differences between mastectomy versus lumpectomy and radiation for early-stage breast cancer. And there seemed to be a survival benefit for the women who had lumpectomy plus radiation, which sort of makes people wonder, did I make the right decision? So, Dr. Weiss, can you give us a little background on the study and then why this is important and what women can take home from this?

Dr. Marisa Weiss: Right. Well, thank you for having me today. This is such an important choice that many women who are diagnosed with breast cancer have to make, and it comes soon after the biopsy is done that tells you you have a diagnosis. You have to make this big choice: Do I want to keep my breast and have what’s called beast conserving therapy -- some people call it breast preservation therapy -- or do I want to have a mastectomy, or do I need to have mastectomy? So let’s go over all that.

So, basically, when it comes to women with early-stage breast cancer, generally, the standard of care still is to treat the whole breast one way or the other. And you can do that by removal of the whole breast, that’s called mastectomy, and, in the case of this study and in practice today, breast conserving therapy means removing the area of abnormality in something called a lumpectomy, getting clear margins around it, and then using radiation to treat the remainder of the breast tissue.

Jamie DePolo: And when you say clear margins, just to make sure everybody understands, that means that the area, the rim of tissue around the cancer that was removed, there’s no cancer cells in that. So it’s a clear rim of healthy tissue, right?

Dr. Marisa Weiss: What the negative margin means is that there’s no cancer cells on the ink on the outside of the specimen that was taken out. The margin is the space between the cancer and the edge of the specimen, and that’s the margin, but a clear margin means that there’s no cancer cells on that very outside. The outside of, let’s say, a ball of tissue that’s been removed, there’s nothing on that outside surface.

Dr. Marisa Weiss: Yeah. So, this study out of the Netherlands looked at 37,000 women in Holland who were treated between the years of 2000 and 2004. And because Holland has a national health service and they can track every single person who’s treated in Holland, they can learn a lot about their population, and they can observe them over time. So this is a very important study because it is a whole population, and it’s an observational study because you’re tracking them all throughout their treatment and beyond because all the data is collected systematically.

And that’s different, though, from a randomized control study where only about 5% of women who have breast cancer in this country participate, and, generally speaking, one treatment arm gets the standard of care, which could be placebo, and the other treatment arm gets the thing that you want to ask a question about. It might be a new treatment or whatever.

In the case of a randomized control trial, the decision of breast preservation therapy or conserving therapy versus mastectomy, half the people will get breast conserving therapy. Half the people will get mastectomy. I only bring this up because part of the discussion about the value of the results, which I’ll go over in a sec, is that it’s not a randomized control trial, which we consider to be the gold standard, yet it’s still an important study to talk about because it’s a whole population, and they followed the whole population over a period of time.

Jamie DePolo: So it’s large, even though it wasn’t randomized, but it’s interesting.

Dr. Marisa Weiss: Yes. It’s got some sturdy numbers in there worth really looking at. And so what happened was, they compared this... in the group of 37,000, about 58% had breast conserving therapy, about 42% had mastectomy. And they looked at how do these women do 10 years later after their treatment? And it looked like the people who had breast conserving therapy did a lot better than the women who had mastectomy.

Then they scratched their head and said, “Well, wait a minute. The women in each group are not the same.” So of course one group’s going to do better than the other if one group, like mastectomy, has cancers that are bigger or tends to have more lymph nodes involved or something like that, that would make them unequal. So then they went back, and they went through all their data, and they tried to come down to two groups that were, in fact, very, very similar.

Similar in stage, similar in treatment, similar in age, lymph node involvement, the grade of the cancer, the treatments given. As similar as they could get it given the constraints of the data that they had. And when they corrected it in that way, breast conserving therapy still did better than mastectomy. That means that women who had breast conserving therapy had an overall survival advantage of about 19%. They did about 19% better than the women who had mastectomy.

Jamie DePolo: And do we know why?

Dr. Marisa Weiss: And we don’t know exactly why. You know, mastectomy removes the breast out of the chest area. It’s sort of like taking the pillow out of the pillow case. And when you do radiation therapy, you’re giving radiation, which is a form of energy, directed to the breasts as well as the whole pillowcase that’s left behind, the skin and the chest wall behind the breast area, and then you might be treating lymph nodes as well, depending on the situation.

So we don’t know why breast preservation people had a better outcome than women with mastectomy. In the past, the survival’s been about the same, but we have seen survival advantages in women who get breast preservation and radiation who have lymph nodes involved because the radiation might be treating more of the tissues at risk than just mastectomy and lymph node dissection. But I think what we can say now in terms of how does this study help women today make the best decision for them.

And I think there’s some good news there because most women are trying to make this decision, and they can make the decision between lumpectomy and radiation versus mastectomy. Most women have early-stage disease. So this choice is possible for them, and I think it will give greater confidence to the women who decide, “You know, I’m going to keep my breast rather than have mastectomy and feel more secure about that choice,” because there is a human nature tendency to think that more is better.

That you get angry at your breast. It betrayed you. When cancer happens, you might feel vulnerable and scared of it and mad at it. All those are normal feelings, and you might say, “I want you out of my body. Get out. Get lost. Go away. I’m going to sacrifice my breast in order to do better.” But a lot that thinking is emotional, and it’s normal to have that emotional reaction.

But it is important also to give yourself the time to let some of those emotions settle down and try to base your decision on the medical facts and the studies that are out there, and this study’s helpful in that way. So I think that when women feel like more is better, then they should be reassured to say, actually, for women who have early stage-breast cancer, that lumpectomy and radiation has at least as good a survival as mastectomy and may even have a better outcome.

Jamie DePolo: The options for reconstruction, does that play at all into this decision?

Dr. Marisa Weiss: So that’s a really good question. So, for women who have mastectomy, across the country about half or so will elect to have reconstruction, more in the cities and less in other places where it’s maybe less available. And reconstruction options can be affected by whether or not you need radiation also.

So if you’re having a mastectomy and you also need radiation because, let’s say, the cancer was on the big side, or you have a lot of lymph nodes involved, or they couldn't get around, whatever the reason, then that may influence what type of reconstruction you might have if radiation’s part of the plan. There are some women who say, “Well, if I have to have mastectomy in the future and if I have lumpectomy and radiation now, then the radiation now might make it harder to have reconstruction later on if I had mastectomy.”

There’s a lot of different ways to think about it, but I think that the best way to think about it is that, for the cancer that’s being diagnosed now, most women have early-stage disease and can be a candidate for breast preservation therapy instead of mastectomy. And these days, mastectomies are becoming more popular because of fear, and also a lot of celebrities have come forward to share their stories, and a lot of them have had mastectomies.

So it is pushing a lot of women to do that, and they do think that more might be better. So I do think that this paper is saying that you can feel confident that lumpectomy and radiation instead of mastectomy will give you the same, if not a better, outcome.

I do know that there are some people who had to have mastectomy, as you know, as well, and people listening in, maybe because they couldn't get around the cancer to have lumpectomy, maybe because there was skin involvement, or maybe there were multiple sites of involvement in the same breast. Therefore, mastectomy was a better option. It may be that someone has a breast cancer gene abnormality, like BRCA1 or 2, and chose mastectomies not just in the treatment of the cancer they were diagnosed with, but they wanted to have the most powerful prevention strategy because they’re at high risk for having another problem in the future.

So we hope that this study helps each one of you listening to make the best decision for your unique situation working with your doctor. And I think that it is an important study, and we of course always want to learn more about future studies that can help inform this choice even more.

Jamie DePolo: Alright. Well, thank you very much, Dr. Weiss. That was helpful, and hopefully it will help all the women listening out there who may be wrestling with this decision right now.