Adding the Patient Perspective to Research -- Heard in the Halls: Voices From the 2018 American Association for Cancer Research Annual Meeting
Podcasts
/
Research

Adding the Patient Perspective to Research -- Heard in the Halls: Voices From the 2018 American Association for Cancer Research Annual Meeting

Desirée Walker talks about her poster on the importance of involving patients in breast cancer research projects. 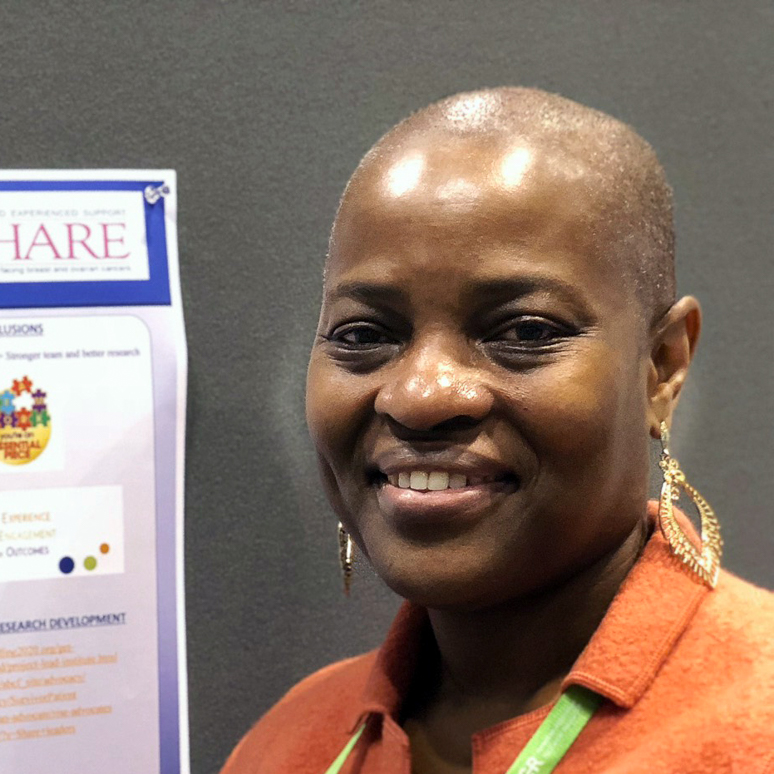 Desirée Walker: Good afternoon. My name is Desirée Walker, and I’m from New York City. I am a two-time breast cancer victor, is how I like to identify myself. I am affiliated with many organizations, but for the purpose of AACR, Young Survival Coalition is one of the organizations that I’m connected to. They have a special program called RISE -- Respected Influencers in Science and Education -- and I am a legacy member, i.e. I’ve been through the trainings already, and so I’m able to mentor the “newbies,” as I like to say.

I’m also connected with SHARE, which is a breast and ovarian cancer organization in New York City, and with them, I wear many hats. They do have a SHARE leaders program where we have a group of individuals who have gone through, what I like to say, is “research training.” And so, we review articles, etc., but I also facilitate two support groups for them for women of African descent, and I also do outreach educating on breast and ovarian cancer in the African American community, as well.

And so, I'd like to say that I was diagnosed at the age of 38. And at that particular time, I was only concerned with learning what my options were. But, unfortunately, I had a recurrence at the age of 47. And, because I had passed the 5-year milestone, and then I learned at that particular point there are such a thing as dormant cells, I realized I now needed to learn the science of breast cancer, and I was introduced to the National Breast Cancer Coalition and their Project LEAD. I applied, I was accepted, and so therefore as an alum, I was able to now apply to become part of the [Department of Defense]'s [Breast Cancer Research Program], and then later, I also applied to become a reviewer for PCORI’s [Patient-Centered Outcomes Research Institute] research work as well. And so, those gave me my foundation, and that’s what I have helped to build on.

I’ve had the good fortune of being a presenter at the BCERP -- Breast Cancer in the Environment Research Program -- and as a result of that presentation on advocates training advocates, I met a researcher out of Columbia's Mailman School of Public Health. And, upon talking and realizing we both lived in the same city, she said we should work together. And so I’ve had the good fortune of being a patient advocate, research partner, community partner -- however you’d like to define me -- in order to help the work that she has already started, as well as to help her think about new projects that she could potentially try to pilot. And so, I aid in terms of helping to develop adult curriculum that we can go and do outreach in their community of Washington Heights and surrounding areas, as well as working on high school curriculum, so that we can help young people to understand the behaviors and the lifestyles that they have today can potentially impact them and their health in the future. And also, I always say young people have a greater influence on their parents than we actually believe, and so educating them, you can also get to the adults as well.

In addition to that, I’ve also had the opportunity of joining the Central IRB [Institutional Review Board] and being a panel member to give the patient advocate voice to ensure that the literature for patients is appropriate in terms of health literacy, the patient protections are in existence as well, and that the participants -- in terms of recruitment -- is equitable also. And so, I like to say that although I have not gone to graduate school, I have spent a lot of time educating myself, and I feel that I can be and have been an asset to any research team. And I think that we can, actually -- as patient advocates -- add a perspective that is definitely needed in research. And we are and can be an integral part of the team. And so we are essential to the research, and we need to be involved in every aspect of the research as well, because that leads to better experience, better engagement, and better outcome at the end of the day.