Dr. Jennifer Litton discusses the results of the EMBRACA study she presented at the 2017 San Antonio Breast Cancer Symposium showing that talazoparib, an experimental targeted therapy medicine, improved the time until the cancer grew in women with a BRCA1 or BRCA2 mutation who had been diagnosed with metastatic HER2-negative breast cancer compared to chemotherapy.

Listen to the podcast to hear Dr. Litton explain:

Editor's Note: Talzenna (chemical name: talazoparib) was approved by the U.S. Food and Drug Administration on Oct. 16, 2018, for the treatment of metastatic breast cancer in women with BRCA mutations. Learn more about Talzenna. 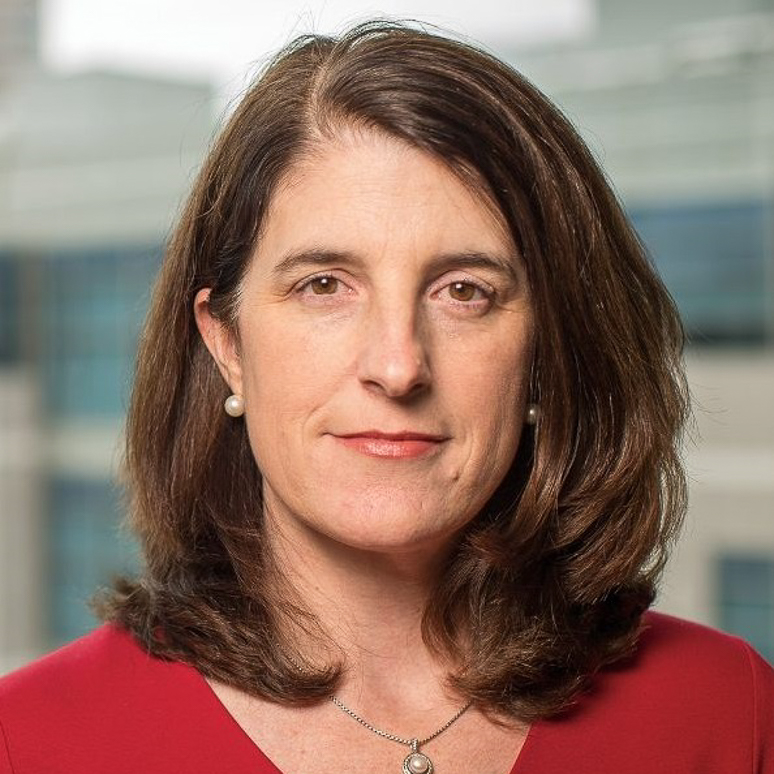 Dr. Jennifer Litton is a board-certified medical oncologist and professor of breast medical oncology at the University of Texas MD Anderson Cancer Center in Houston, where she is also vice president of clinical research. She also is a member of the Breast Immuno-Oncology Task Force of the National Cancer Institute.

Jamie DePolo: Hello, everyone. Welcome to the Breastcancer.org podcast. I’m Jamie DePolo, the senior editor of Breastcancer.org. We’re on location at the 2017 San Antonio Breast Cancer Symposium. My guest is Dr. Jennifer Litton, associate professor of breast medical oncology at the University of Texas, MD Anderson Cancer Center. She’s presented results from the EMBRACA study, which looked at using the experimental targeted therapy, talazoparib, compared to chemotherapy to treat advanced-stage HER2-negative breast cancer in people who have a BRCA1 or a BRCA2 mutation. Dr. Litton, welcome to the podcast.

Dr. Jennifer Litton: Thank you so much for inviting me.

Jamie DePolo: Thank you for being here. So first, to help everybody out, because this is an experimental medicine, can you explain how talazoparib works?

Dr. Jennifer Litton: Yes. So talazoparib is a PARP inhibitor, and it actually blocks one of the enzymes that helps DNA repair itself. And in addition to blocking that repair, it also sits and traps itself onto the DNA strand while it’s trying to divide. So it stops these cells that are rapidly dividing from dividing, and the cell dies off.

Jamie DePolo: Okay, perfect. Now I understand this study that you worked on looked specifically at people with a BRCA1 or a BRCA2 mutation. And if you could explain a little bit about why those people were chosen, is the cancer more aggressive in those people, or what?

Dr. Jennifer Litton: Well, actually, this is a point where we can take advantage of that BRCA gene not working. BRCA genes are, in fact, fixer genes. We have DNA damage all the time when our cells divide, and when the BRCA1 or 2 gene is not working, mistakes get by and the cell can transform to a cancer cell. So if a cell already has a defect in repairing its DNA, such as having BRCA1 or 2 mutation, and we block that escape route that that cancer cell might try to still fix the DNA just enough to divide and still be a cancer cell? By blocking both of those at the same time, it’s what we call synthetic lethality, and these drugs can be very effective in patients with these inherited mutations.

Jamie DePolo: Okay, and I’m wondering, too — so actually I have two questions now. So would talazoparib work in people without that mutation? And is it possible you would study talazoparib in people who have, say, another mutation linked to a higher risk of breast cancer?

Dr. Jennifer Litton: Those are really great questions. So for the first one, we really are seeing that a BRCA mutation is one of the things that really sensitizes patients with tumors to these particular drugs. There are very small groups in some of the early phase trials, and we really did see most of the effect of the single agent just with those patients with the inherited mutation. That being said, I think that there is a lot of promise for this class of drugs in some combinations that are going to go forward in clinical trials to try to expand the group of patients that might benefit from this drug. Now, your second question?

Jamie DePolo: Second question was, do you think that talazoparib could potentially work against other mutations linked to a higher risk of breast cancer?

Dr. Jennifer Litton: Absolutely. So that is one of the things that is absolutely going forward. As we’ve expanded our genetic testing, where we’re seeing other genes that are in that same repair pathway as BRCA, such as PALB2, although they weren’t specifically in these trials as these trials were devised years ago, that is certainly moving forward and I think would be another reason to expand, to make sure that we’re offering genetic testing to people who are appropriate to be tested. Because it might have further therapeutic implications at this time in clinical trials and hopefully in the future.

Jamie DePolo: Okay. That’s very interesting. Now in this study, you compared talazoparib to a chemotherapy regimen of doctor’s choice. Can you talk a little bit about side effects between the two groups?

Dr. Jennifer Litton: Sure. So, just first, there’s no standard one drug in this situation in patients with metastatic, ER-positive or triple-negative breast cancer. So it would be really hard to just pick one that we had to compare. And therefore we had to pick what was generally used. As far as the side effects, first of all, talazoparib is an oral pill once a day, versus — although capecitabine is oral, it is twice a day and the other chemotherapies are IV.

We are seeing increase of anemia in patients with talazoparib, often very well managed with either dose delays, dose reductions. Some patients did need blood transfusions, however only two patients in the entire study needed to come off of the talazoparib arm because of the anemia. The other interesting thing that we saw a little bit differently was alopecia, so hair loss, was higher in patients with talazoparib, about the same as we would see in chemotherapy, but they do appear to be much more often grade one, so more mild hair loss than the grade two hair losses that we saw in patients on the chemotherapy arm.

Jamie DePolo: Okay. And the results of this study showed that talazoparib improved the time, it lengthened the time, until the cancer grew. Is that correct?

Dr. Jennifer Litton: Absolutely. So it did improve progression-free survival with a hazard ratio of 0.54 that was highly statistically significant. Now, at the time that we were doing this analysis, there was a preplanned analysis to look at overall survival if the progression-free survival was positive. So we did take a look at overall survival, so please know that it is an interim analysis, and only 51% of the events needed to calculate this were observed at this time. Now, the hazard ratio, 0.76, it is not statistically significant at this time.

But the interesting thing is when we look at the curves, the curves are really separating at the end of the tail of the curves. And as we look now, there is still a significant higher percentage of patients still on talazoparib or still being followed for survival, compared to the physician’s choice. So I think following this out as this data matures is going to be very important.

Jamie DePolo: And remind me, how long have the patients been followed so far for the interim analysis and then how long do you plan to follow them?

Dr. Jennifer Litton: Absolutely. So the median follow-up at this point is a little over 11 months. But we are following for full survival and points of all the patients on the trial.

Jamie DePolo: Okay. And as far as the regimen of talazoparib, is that something that a person would take as long as it’s effective, or is it like for a year and then you stop, or…?

Dr. Jennifer Litton: You know, at this point, for this particular study, it was looking at patients with metastatic cancer. So you took it for as long as it worked until it stopped working or there’s too many side effects. Which is exactly how we treat patients with metastatic disease with any of our therapies at this time. So at this point, they’re taking one dose just once a day, and it’s oral. So they’re not coming in, doing IVs, and I think that really, one of the keys to this study is not just a progression-free survival and the interesting overall survival, but when we look at quality of life, that actually quality of life improved on patients who are on talazoparib versus deteriorating with patients who were on chemotherapy. And the time to a clinically meaningful deterioration in their health status was significantly improved in those patients who were on talazoparib.

So, you know, when we’re looking at toxicities and it’s matching, but what we’re seeing is that patients gained function, too, as opposed to just all toxicity. And I think that’s why we’re very intrigued by this class of drugs.

Jamie DePolo: Okay. That’s very huge for patients. So my last question is, and I know you are the researcher, you’re not the drug company, but given these promising results, does it seem likely down the road that we could see an approval for this?

Dr. Jennifer Litton: You know, yes. So I am an academic physician, so I’m in no way involved financially with this or the other trials as far as receiving… but I’m very excited about this class of drugs. I certainly hope it goes to the FDA so that it’s an option for our patients. Just seeing, you know, giving an oral once-a-day option to our patients and the quality-of-life change, even if we didn’t see the improvements we were seeing, I would still think was important, and yet we’re still seeing these improvements in quality of life, progression-free survival. And we’ll have to see what happens with the overall survival.

The EMBRACA trial was the one, it’s the largest trial, and it was actually powered to see a difference in overall survival and that does stand it apart from some of the other trials. So this will be important to follow out.

Jamie DePolo: Excellent. Thank you so much.