The Bodice Project -- Heard in the Halls: Voices From the 2018 American Association for Cancer Research Annual Meeting
Podcasts
/
Complementary Therapy

The Bodice Project -- Heard in the Halls: Voices From the 2018 American Association for Cancer Research Annual Meeting

Artist Kathryn Stella, vice president of The Bodice Project, discusses how the sculptural exhibit promotes inner healing among women and men who have been diagnosed with breast cancer.
May 8, 2018
Advertisement
00:00
Download
00:00
Advertisement

Artist Kathryn Stella discusses how the Bodice Project sculptural exhibit promotes inner healing among women and men who have been diagnosed with breast cancer. 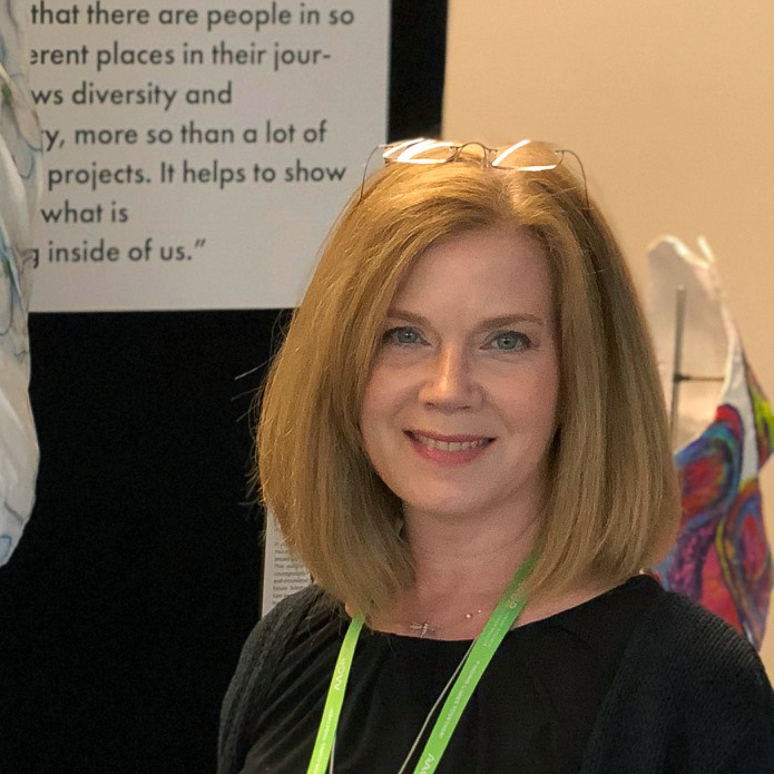 Kathryn Stella is an artist and vice president of the Bodice
Project.

Kathryn Stella: Hi. I’m Kathryn Bragg-Stella. I’m the vice president of the Bodice Project, which is a sculptural art exhibit about emotional healing after breast cancer treatment and surgery. We like to call ourselves the nexus of art and life. This is a sculptural exhibit that are body casts and sculptures made after breast cancer survivors and those who are dealing with treatment right now, both women and men.

So, we promote awareness and emotional healing. One of the things we find is that women and men who have gone through surgery really see themselves as different people. They’ve had a part of their body amputated, and it affects how you view your life -- like any amputee -- only it’s not something one discusses. Women wear prostheses and things to disguise the fact that they’ve lost their breasts, or that their breasts have been impacted, and going through life hiding what’s happened to you. This exhibit gives them an opportunity to talk to the world about their experiences, who they feel like they are, and to discover in themselves a great deal of inner beauty that some of them felt like they had to walk away from.

We have here -- you can’t see this -- but there’s text images above each sculpture that are quotes of the survivors, the people who have been through breast cancer treatment and surgery, as well as also our models. We interview them, and then we anonymously post these quotes about just their reactions to both having been through treatment and surgery and how they felt about being a part of this art exhibit.

We started in a small community in Shepherdstown, West Virginia. The president of our organization -- whose name is Cynthia Fraula-Hahn -- began working on these bodice sculptures to both support some friends of hers who were dealing with breast cancer and to support a fundraiser that we had started there. So, going forward, we discovered many artists joined in because it’s such a great idea. And it’s seeing how the women and men who are dealing with breast cancer react to it was so powerful that we decided to organize and create this as an organization -- so we are an incorporation as well as an art movement.

What we like to do going forward is we like to identify either breast cancer survivors who are activists in their area or artists who are activists who support breast cancer awareness. Between the two of them, it’s usually not too difficult to find people who’d like to be involved in the process. And so, what we do is we mentor both the artists and the survivors on working with each other. What we found mostly is that almost every survivor knows an artist, and that artist is always honored -- tickled to death -- to be asked to make a sculpture or a body cast after their dear friend or someone who they admire, and vice versa.

You know, often the artists who find out about this are like, “I would love to be involved in this.” And you know, some of them who don’t know that much about breast cancer, it’s changed their lives. By meeting someone, working with them in this very intimate way -- and of course, we work through… there are ways to work with somebody who’s been through surgery, and there are things that you do and you don’t do, and I have found that there’s never been anyone who’s been insensitive. It’s been very positive -- so far, knock on wood -- we’ve never had anyone come away feeling anything other than changed for the better.