People Satisfied With Decision to Use Scalp Cooling, Even If It's Not Effective -- Heard in the Halls: Voices From ESMO 2019
Podcasts
/
Side Effects

People Satisfied With Decision to Use Scalp Cooling, Even If It's Not Effective -- Heard in the Halls: Voices From ESMO 2019

Dr. Conleth Murphy discusses his research on scalp cooling in people being treated with chemotherapy for cancer. 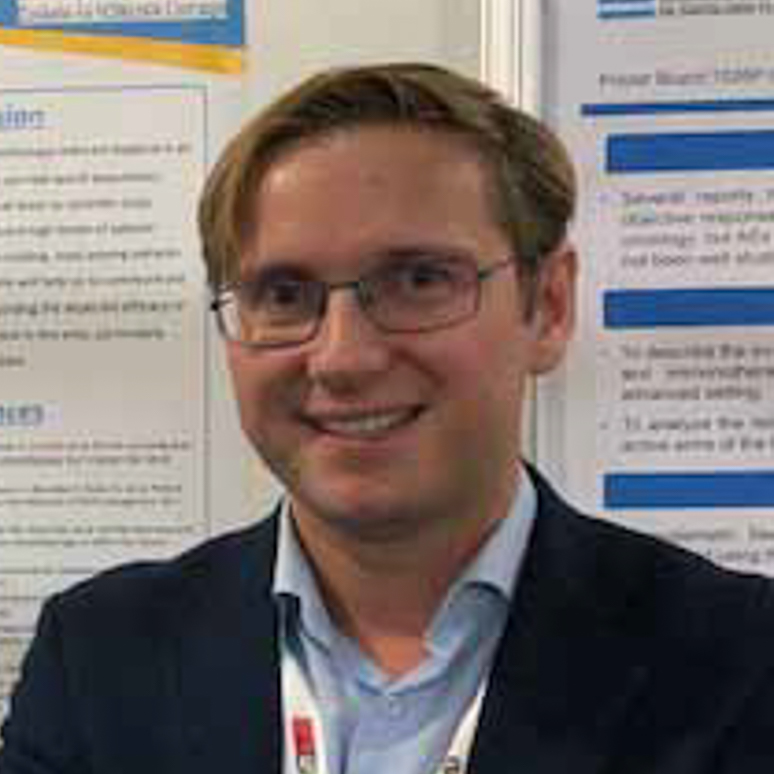 Dr. Conleth Murphy: My name is Conleth Murphy. I’m a medical oncologist based in Cork, Ireland, and I’m presenting a poster here at ESMO 2019 on the uptake, patient satisfaction, and efficacy of scalp cooling in patients receiving chemotherapy.

Jamie DePolo: Can you talk a little bit about who the patients were, what kind of cancer they were diagnosed with?

We had a few patients in other groups as well, we had quite a number of ovarian cancer patients, and we had some patients with endometrial cancer and other tumors.

Jamie DePolo: And it looks like, from the results here on your poster, that most of the people were very satisfied that they made the choice to do scalp cooling, whether or not it was effective? Is that correct?

Dr. Conleth Murphy: Yes, that’s correct, and that was a little bit surprising to us. We had assumed that the patients where scalp cooling was not effective would regret their decision to use scalp cooling, because it does add to time in the chair in the oncology day ward, which is very important for patients, obviously.

And, you know, there is also a certain level of discomfort associated with it. But it’s very interesting, in speaking to my patients who are talking about my further discussions with future patients, they always say, “Counsel your patients to expect a little bit of discomfort for the first 15 minutes or so.” But typically the discomfort resolves at that point, so if they can stick it out for that period of time, they’ll often be able to tolerate it thereafter.

Jamie DePolo: And one last question. This was done in Ireland, so was there an extra cost for the patient associated with using scalp cooling?

Dr. Conleth Murphy: No, there wasn’t. There was a cost for the hospital, but the hospital perceived it to be important in terms of overall patient care and holistic patient care, so they invested in the machine, which is capable of treating two patients at a time. So, we have a bay in our day ward with two seats, and that’s reserved for scalp-cooling patients.

Jamie DePolo: Alright, thank you so much.