Listen to the podcast to hear Dr. Leon-Ferre explain: 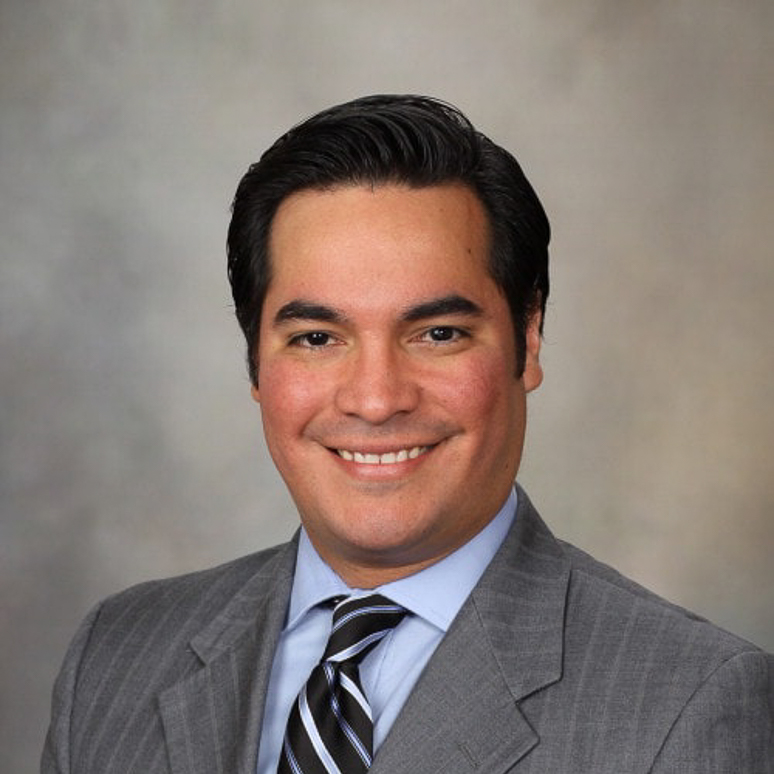 Dr. Roberto Leon-Ferre is a breast oncologist at the Mayo Clinic.

This podcast is made possible by the generous support by Lilly Oncology.

Jamie DePolo: Hello, everyone. I’m Jamie DePolo, senior editor at Breastcancer.org. We’re podcasting on location from the 2018 San Antonio Breast Cancer Symposium. My guest is Dr. Roberto Leon-Ferre, assistant professor of oncology at the Mayo Clinic. We’re going to talk about his research showing that oxybutynin helped reduce the number and severity of hot flashes in women who can’t take hormone replacement therapy, which includes most women who have been treated for breast cancer. Dr. Leon-Ferre, welcome to the podcast.

Dr. Roberto Leon-Ferre: Thank you for having me.

Jamie DePolo: So could you give us sort of a quick summary of your study?

Dr. Roberto Leon-Ferre: Absolutely. So first of all, hot flashes are a very common problem that can affect many women as they transition through menopause, and amongst breast cancer survivors this problem is even more significant given that the hot flashes can be more severe, they can be also more long term. Because of many of the treatments that we have to use in the setting of breast cancer and also because women that have a history of breast cancer or are at higher risk of breast cancer cannot take some of the most effective therapies for hot flashes which would be hormone replacement therapy.

So in this study we assess the utility of oxybutynin against placebo in treating hot flashes in women that either had a history of breast cancer or were at risk for breast cancer and that had hot flashes of sufficient severity for them to be interested in taking a medication for it.

The design of the study was a prospective randomized study that enrolled about 150 women that were assigned to three different treatment arms, one that evaluated oxybutynin at a dose of 5 milligrams twice daily, which is a kind of low to intermediate dose of what is used, it’s usually used for other indications; and the second arm that evaluated oxybutynin at 2.5 milligrams twice daily, so half of that original dose; and a third arm with placebo. We included a placebo arm given that a lot of the studies evaluating hot flashes have demonstrated that women that take placebo can experience a 20-30% reduction in hot flashes.

So the patients that were enrolled in the study took the assigned medication for a period of 6 weeks after a baseline week where no medication was administered. They filled out questionnaires to establish what the baseline frequency and severity of their symptoms were, and then they filled weekly questionnaires as well trying to measure a series of quality of life metrics. And then at the end of 6 weeks, we intended to analyze the intrapatient change in all of those measures, meaning that each patient was analyzed individually as her own control, you know, compared to baseline.

And what we saw was that oxybutynin indeed was more effective than placebo in both doses. The study was not designed to compare the two doses against each other but compare each dose to placebo, and both of those doses were effective. They significantly decreased hot flashes. The oxybutynin 5 milligrams twice daily decreased hot flashes by about 80%, the hot flash severity and frequency; the lower dose decreased them by about 65%; and then placebo by about 20 to 30%, which is consistent with what we’ve seen in other studies.

More important than just reducing the frequency and severity of hot flashes, what we saw in our study as well is that patients rated a significant improvement in the hot flash interference with daily activities. So we measured, for example, how did the hot flashes interfere with work, how did the hot flashes interfere with leisure activities, social activities, concentration, sexuality, and overall quality of life, and patients on oxybutynin reported an improvement in nearly all of those quality metrics with the exception of concentration and sexuality. All the others were improved.

And it was also very pleasing to see that the side effects that they experienced were very tolerable, did not lead to discontinuation of the drug more frequently than placebo, and that most patients had mild degree of side effects.

Jamie DePolo: Okay. Now, I can’t remember, in the study, did you differentiate in the women who had been treated for breast cancer, whether they were postmenopausal when they were diagnosed or if they were thrown into menopause by treatment? Did that matter at all?

Dr. Roberto Leon-Ferre: It did not matter.

Dr. Roberto Leon-Ferre: So we did not account for necessarily the menopausal status at any point, but just the fact that they were having hot flashes. So by definition many of them were postmenopausal, some of them may have been perimenopausal, and a good proportion of them were taking — more than half of patients were taking, actively, tamoxifen or an aromatase inhibitor for breast cancer which was responsible for those hot flashes.

Jamie DePolo: That was going to be my next question, how many were on some sort of hormonal therapy. Okay.

Jamie DePolo: In most, that’s its main use. So why did you think it might work for hot flashes, and what’s the mechanism that it works?

Dr. Roberto Leon-Ferre: Yeah. So oxybutynin, as you mentioned, is a drug that is currently FDA approved for the treatment of overactive bladder. So that’s the FDA-approved indication and that is why it is used in clinic most often, and it’s an anticholinergic drug, so it means…

Jamie DePolo: What is… I’m sorry, what does that mean?

Dr. Roberto Leon-Ferre: An anticholinergic drug means it blocks certain substances in the brain that regulate a number of functions, particularly involuntary muscle activity, for example, and that’s why it’s used for urinary incontinence, to control bladder spasms.

Dr. Roberto Leon-Ferre: And it can do that as well in other types of muscles, so it can affect the respiratory involuntary muscles and so on. But an interesting observation that had been noted was that this medication, when patients took it for one of those indications, patients experienced decreased sweating, right? So this medication has been explored in patients that suffer from hyperhidrosis, so excessive sweating, and it’s found to be very effective there. So there has been that notion, if it decreases sweating could it help the night sweats that women with hot flashes can experience? And there have been some anecdotal experiences as well in the clinic that this drug was effective. There was also a retrospective study before published by Sexton and collaborators that had suggested that this drug was effective.

And as we were designing this study, actually, there were no randomized prospective studies evaluating this drug in a more formal way. However, as we embarked on accruing patients there was another study that was published as well evaluating oxybutynin, but at a higher dose than what we evaluated, and that study suggested that it could be effective but the side effects, you know, were a little more problematic at that dose.

Jamie DePolo: Because the higher dose.

Dr. Roberto Leon-Ferre: So the investigators of that study suggested to evaluate a lower dose, which is what we were planning to do anyways. So that’s how it came to be.

Dr. Roberto Leon-Ferre: Anecdotal experiences, some retrospective data, and now I think we can say with the two prospective studies that the drug actually works.

Jamie DePolo: Okay. Now, could this be a long term solution for hot flashes? Because I’ve read in your report it doesn’t interfere with the effectiveness of tamoxifen, but long-term use of it has been linked to some cognitive decline. So how long is long-term, and I’m also wondering, could women take this like they do hormone replacement therapy, at the lowest dose possible for the shortest time possible and then maybe sort of be beyond hot flashes? Is that possible?

Dr. Roberto Leon-Ferre: Yeah. This is not something that we can necessarily answer with our study, but what I can say is that the common use of oxybutynin for many years has been linked to potential cognitive decline in the long term. In the short term there can also be episodes of confusion, particularly in the elderly patients or in patients that are taking other medications that are also anticholinergic, as I have mentioned, and there are a variety of medicines that can have that effect. So it’s more of a problem when you mix medications of that nature, and we did not allow the use of those potential medications in our study, so that’s why we didn’t see a lot of that. But it is a precaution that clinicians and patients need to be aware of if they choose to try this medication.

In terms of how long is too long, I don’t think that we fully understand that, but we’re talking about, you know, years of taking the medicine. In the setting of urinary incontinence, patients usually take it long-term for years because it continues to be… It’s not a reversible problem unless they have a procedure done. So it’s already being used in that setting.

So I can’t answer for how long, however clinically and anecdotally, not evaluated in this study, it appears the drug is effective even if used in short periods of time, right? Once you stop the medicine, the hot flashes may recur, so we do see that in most hot flash studies, particularly breast cancer-related ones, the hot flashes tend to diminish as time goes on. So our hope would be that you can use this medication in the initial period when the hot flashes are more severe, more frequent, and then as the patient starts to adjust to their menopausal state, hopefully they won’t need as much of the medication and eventually, hopefully stop.

Jamie DePolo: Okay. Thank you very much. I appreciate your time.