Lumpectomy, also called breast-conserving surgery, is a procedure that removes the breast cancer along with a small amount of the healthy tissue surrounding it.
Reviewed by 2 medical advisers
Advertisement
Sections
Lumpectomy plus radiation therapy
What to expect with lumpectomy
Getting your pathology results
Re-excision lumpectomy
Lumpectomy risks
Questions to ask your surgeon about lumpectomy
Oncoplastic lumpectomy and reconstruction after lumpectomy
Partial breast forms
Advertisement

Lumpectomy (also called breast-conserving surgery) is surgery to remove a breast cancer tumor (the lump) and the rim of healthy tissue surrounding it (called the margin).

Unlike mastectomy, which removes the entire breast, lumpectomy removes only the cancer to preserve as much of your breast as possible.

Because only part of the breast is removed, lumpectomy is also sometimes referred to as a partial mastectomy. The amount of tissue the surgeon removes can vary greatly. The following procedures are considered forms of lumpectomy:

Removing a margin of healthy tissue surrounding the cancer helps ensure that the surgeon removes all of the cancer. During lumpectomy surgery, some surgeons use a technique called cavity shave margins: Surgeons shave a thin layer of tissue from the sides of the area from where they remove the tumor so no cancer cells are left behind.

If you’re considering lumpectomy, it’s a good idea to talk to your surgeon about how much tissue needs to be removed and how it might affect your breast's appearance. In some cases, surgeons can use plastic surgery techniques during the lumpectomy to achieve a better cosmetic result. Called oncoplastic lumpectomy, this approach may make breast-conserving surgery possible even if you have a larger tumor or multiple areas of cancer.

Doctors typically recommend radiation therapy after lumpectomy to help reduce the risk of the cancer coming back (recurrence). The goal of radiation therapy is to destroy any cancer cells that might remain in the breast after the surgeon removes the tumor.

Back in 2002, the influential NSABP-06 Trial found that after 20 years of follow-up, total mastectomy did not offer an advantage over lumpectomy in terms of how long women lived (overall survival), how long they remained free of recurrence (disease-free survival), and whether they developed metastatic disease (cancer spreading beyond the breast). 1

Other studies have confirmed those results:

When choosing the type of radiation therapy and a schedule that makes sense, you and your doctors consider your individual situation, your age, and the cancer’s characteristics. Examples include:

Advertisement
Learn more
Radiation Therapy
Is lumpectomy plus radiation right for you?
Advertisement

Your doctor can help you decide which surgery is best for your unique situation. Lumpectomy plus radiation therapy may be right for you if:

With some exceptions, you may not be a candidate for lumpectomy plus radiation if:

Although lumpectomy plus radiation is just as effective as mastectomy for most women, some women decide to have a mastectomy for better peace of mind about future breast cancer screenings. About half of the women in the United States who are eligible for lumpectomy choose mastectomy instead, according to the National Center for Health Research (NCHR). 4 Mastectomy is a valid choice if it’s right for you, but it’s important to make an informed decision. The NCHR reported that women are more likely to have a mastectomy if they have an older surgeon, are treated at a community hospital instead of an academic medical center, and don’t have a private health insurance plan. It’s important to explore all of your choices so you can decide whether mastectomy is the best option for you.

What to expect with lumpectomy

A lumpectomy is typically an outpatient procedure, which means you go home the same day. If you’re considering a lumpectomy, there are things you can expect before, during, and after the surgery.

Getting your pathology results

After lumpectomy surgery, you receive a pathology report that explains the breast cancer's characteristics, such as:

These and other breast cancer characteristics help you and your doctor decide on a treatment plan that's appropriate for you.

Up to 20% of people who have lumpectomy require a second surgery — called re-excision lumpectomy — because of positive margins. 5

After lumpectomy, the pathologist carefully examines all of the tissue the surgeon has removed from the breast to see if cancer cells are present in the margins — a rim of normal, healthy tissue surrounding the cancerous tumor. The tumor and surrounding tissue are rolled in a special ink so the margins are clearly visible when the pathologist checks thin slices of the sample under a microscope.

Questions to ask your surgeon about lumpectomy

Here are some questions you may want to ask your surgeon as you prepare for lumpectomy surgery:

Oncoplastic lumpectomy and reconstruction after lumpectomy

Lumpectomy can cause cosmetic changes to the breast, such as visible indentation, a tight scar, or distortions in the nipple’s appearance. Any cosmetic changes can depend on the cancer’s size and location, as well as the size of your breast compared to the tumor’s size. Radiation therapy after lumpectomy can also affect the breast’s appearance, including its size and shape, leading to uneven breasts (asymmetry). Uneven breasts might not become obvious until months after surgery and also can be affected by weight gain or loss.

Oncoplastic lumpectomy techniques can help minimize scars, indentation, dimpling, or other cosmetic changes that may result after lumpectomy. Oncoplastic lumpectomy also can help breasts look even, especially if the surgeon needs to remove a large amount of tissue. For example, surgeons can operate on the other breast to help restore symmetry — but some women decide to use a partial breast shaper instead.

If you aren’t happy with the way your breasts look after at least six months, you may want to consider revision reconstruction surgery with a plastic surgeon. Options include fat grafting or tissue transfer to fill in dents or divots or to remedy scarring or hardening. The surgeon can use a tissue flap or implant if the affected breast is distorted or shrunken. A plastic surgeon also can operate on the other breast to make sure both breasts are even.

Some people who have uneven breasts after a traditional lumpectomy may not necessarily want to have reconstructive surgery. In these cases, a partial breast form (or prosthesis) can help achieve a more even appearance.

Many of the manufacturers who make full breast forms for use after mastectomy also make partial forms, sometimes called partial breast shapers. These are silicone breast forms available in different shapes and sizes that you can attach directly to the skin with adhesive or place inside a post-mastectomy bra with pockets.

A certified mastectomy fitter can give you a better idea about the full range of prosthetic options and ensure you get the best-fitting forms for you. Certification means that the fitter has completed education and training in fitting breast forms, completed many hours working with patients, and passed a exam. Many cancer centers have in-house boutiques with certified fitters. Some specialized lingerie shops and department stores have certified fitters on staff as well. The American Cancer Society’s Reach to Recovery program is also a good resource.

Some women prefer to use lightweight breast forms to add more volume and shape to a smaller breast. These breast forms are typically made of foam, polyurethane, or polyester and can be slipped inside a post-mastectomy bra with pockets. You can find these types of bras at various places, including Athleta, AnaOno, and The Busted Tank. In addition to being lightweight, breast forms are fairly inexpensive, washable, and easy to wear and replace. People who prefer breast forms also say they are especially comfortable to wear when they work out. 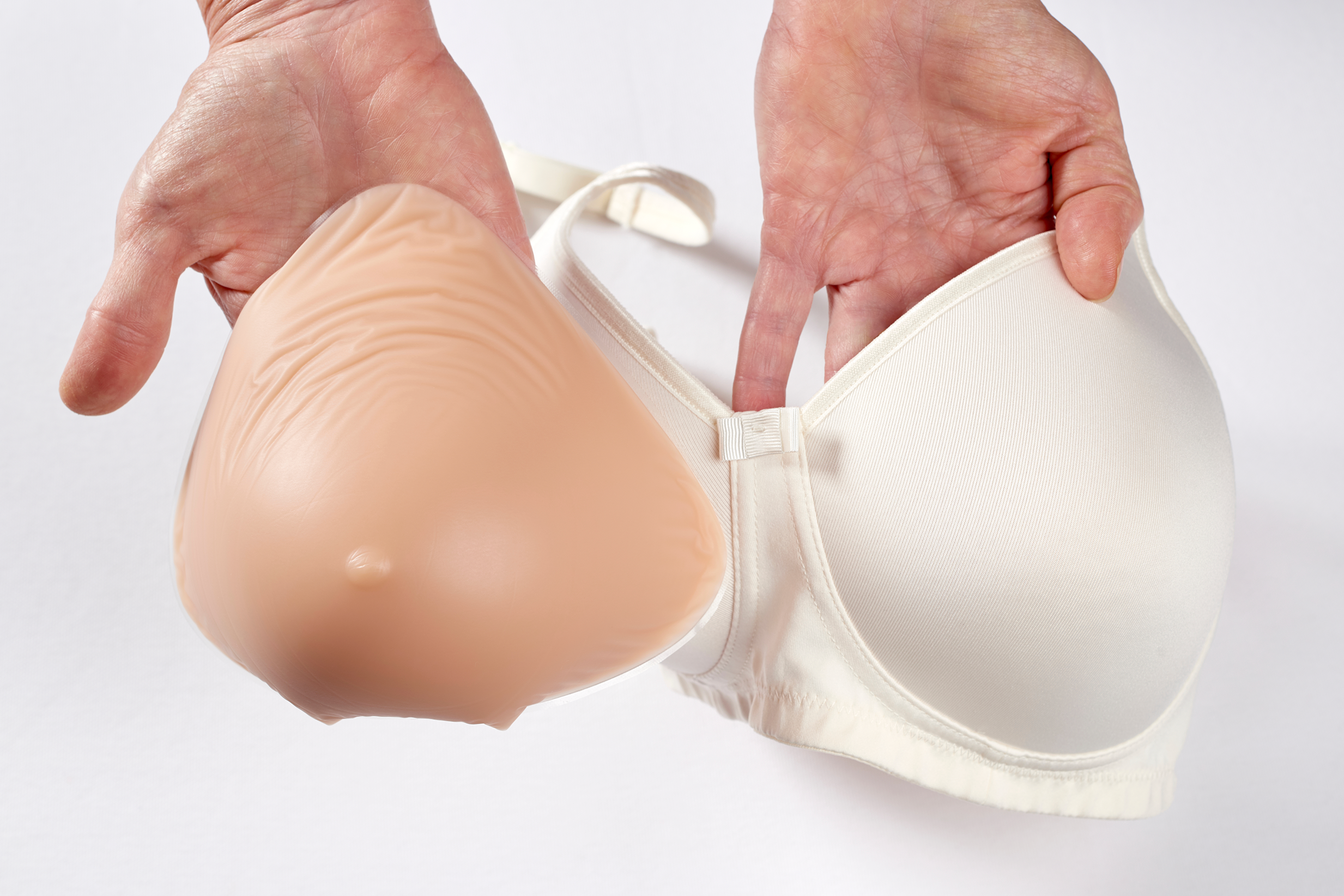